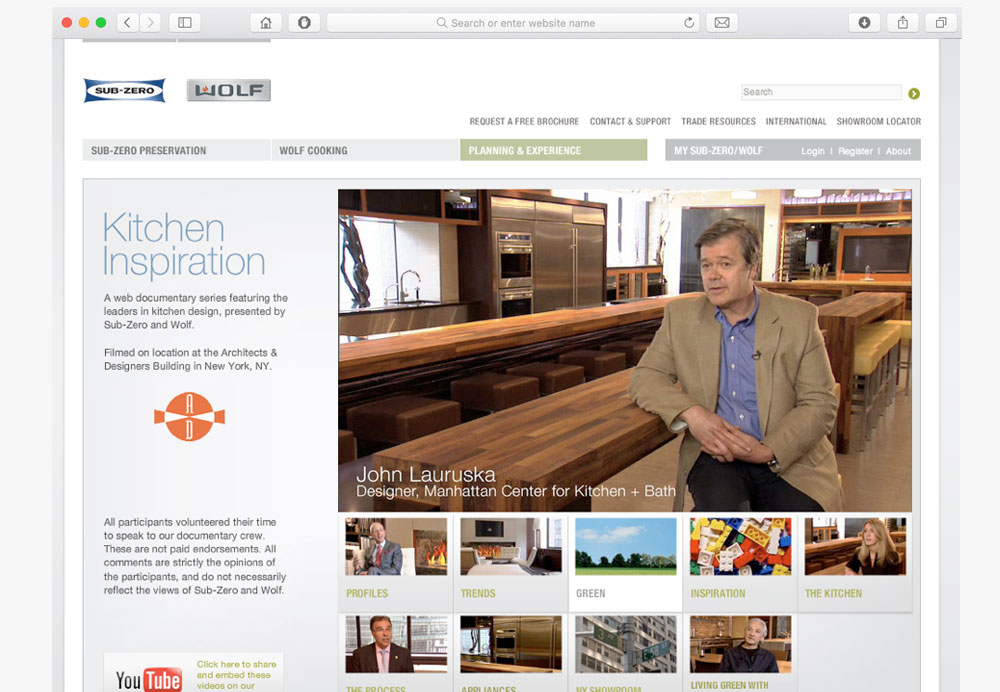 Created and produced by Christopher Parr for Sub-Zero and Wolf: The Kitchen Inspiration Web Documentary Series Trailer. Featuring the leaders in kitchen design, architects, filmed on location at the Sub-Zero and Wolf Showroom in the Architects & Designers Building in New York, NY.

The WMA present this video series with the 2009 WebAward For Outstanding Achievement in Web Development.

MADISON, Wis. (November 19, 2008) – As affluent consumers continue to invest in their homes, and create the kitchens of their dreams, the new web documentary series ‘Kitchen Inspiration’ features top designers and architects as they discuss the latest kitchen design trends. Find out what’s hot – and what’s not – at kitcheninspiration.com.

The web series features 10 leading kitchen designers and architects sharing their perspectives on such topics as green design, new trends, personal areas of inspiration and their favorite styles. The video segments are not paid endorsements – all participants volunteered their time to speak to the documentary crew.

Participating designers and architects include:

Michael McDonough. An award-winning architect and industrial designer, McDonough is a recognized leader in energy efficiency and green building technology. He was recently part of the PBS Green Building “e2” series narrated by Brad Pitt.
Jamie Drake. A designer who has worked with a “Who’s Who” list including Madonna and Mayor Michael Bloomberg, Drake is renowned for his bold style.

Peter Tow. An architect and designer famed for such projects as the Reebok headquarters and Loews Hotel Corporation; Tow is regularly featured on HGTV.

The web documentary series was produced by Sub-Zero, Inc. and Wolf Appliance, Inc., the industry leaders in refrigeration, wine storage and cooking equipment “Our mission was simple: inspire, engage and support consumers planning their kitchens,” said Christopher Parr, Sub-Zero and Wolf’s consumer marketing manager. “‘Kitchen Inspiration’ features design leaders talking about what’s important – colors, materials, trends and the significance of going green. It’s like having your own personal kitchen designer at the click of a mouse.”

While perusing the web site, consumers are invited to open a “My Sub-Zero/Wolf” account, create wish lists, save recipes and kitchen trend articles – and browse over 300 images of beautiful kitchens.