In 2001, Christopher Parr was the recipient of the Viterbo University Outstanding Alumni Award for Professional Development. For significant and broad accomplishments in one’s professional career, Viterbo honored Christopher with their highest alumni award.

Christopher has a BA from Viterbo University, Master’s degree from Brandeis University, and has gone on to receive a breadth of experience in project management, branding and strategic planning. 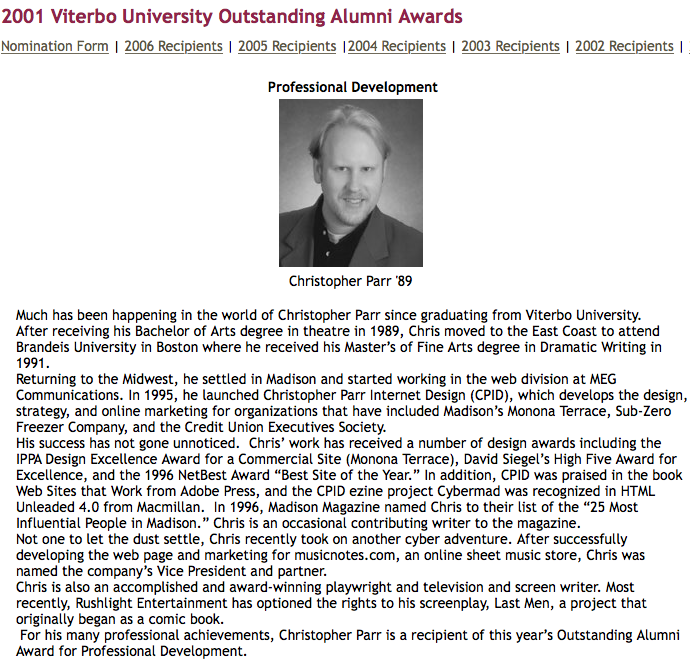 “Much has been happening in the world of Christopher Parr since graduating from Viterbo University.
After receiving his Bachelor of Arts degree in theatre in 1989, Chris moved to the East Coast to attend Brandeis University in Boston where he received his Master’s of Fine Arts degree in Dramatic Writing in 1991.
Returning to the Midwest, he settled in Madison and started working in the web division at MEG Communications. In 1995, he launched Christopher Parr Internet Design (CPID), which develops the design, strategy, and online marketing for organizations that have included Madison’s Monona Terrace, Sub-Zero Freezer Company, and the Credit Union Executives Society.
His success has not gone unnoticed. Chris’ work has received a number of design awards including the IPPA Design Excellence Award for a Commercial Site (Monona Terrace), David Siegel’s High Five Award for Excellence, and the 1996 NetBest Award “Best Site of the Year.” In addition, CPID was praised in the book Web Sites that Work from Adobe Press, and the CPID ezine project Cybermad was recognized in HTML Unleaded 4.0 from Macmillan. In 1996, Madison Magazine named Chris to their list of the “25 Most Influential People in Madison.” Chris is an occasional contributing writer to the magazine.
Not one to let the dust settle, Chris recently took on another cyber adventure. After successfully developing the web page and marketing for musicnotes.com, an online sheet music store, Chris was named the company’s Vice President and partner.
Chris is also an accomplished and award-winning playwright and television and screen writer. Most recently, Rushlight Entertainment has optioned the rights to his screenplay, Last Men, a project that originally began as a comic book.
For his many professional achievements, Christopher Parr is a recipient of this year’s Outstanding Alumni Award for Professional Development.”